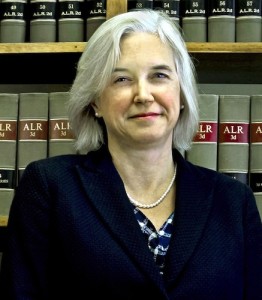 ALISON A. DENHAM was born in Kansas City, Missouri and moved between the east coast and Midwest before putting down roots in Maine. After attending Boston University, she graduated from Wellesley College with honors in 1978 and the University of Maine School of Law in 1981.

Alison began her career in 1982 with a mix of civil and workers’ compensation cases, which continues to this day.  She has successfully litigated civil cases in the Maine Superior Court and U.S. District Court, including auto and premises liability cases. Her appellate practice includes significant decisions in workers’ compensation and civil cases. In the civil arena, she has often represented manufacturers or dealers in product liability cases involving agricultural or industrial machinery. These cases tend to involve multiple defendants and scenarios which arise in Maine’s workplaces where manufacturing machinery has been acquired and modified over decades.

Alison has also defended unusual products liability cases, including foreign object claims.  In March, 2010, she defended a multi-national corporation and its franchisee in a case arising from a large foreign object found in a beverage, achieving a defense verdict.  She represented a major meat producer in litigation arising from a multi-state outbreak of E.coli illness.

Alison recently received the highest possible Martindale-Hubbell Peer Review Rating, AV Preeminent, reflecting her outstanding legal ability and high ethical standards. She is admitted to the Maine, Massachusetts and Federal Bars and is a member of the Maine State Bar Association and Defense Research Institute. She is a past member of the Gignoux Inn of Court.

Alison raised three daughters, has volunteered in the Portland Public Schools and is a past President of the Portland Ballet’s Board of Directors.

For more information or to schedule a consultation, contact Alison Denham email or call (207) 774-1486.